GIVEAWAY: Stay tuned for another giveaway!

DO YOU WANT TO TRAIN YOUR FERRET EASY TRICK IN JUST ONE DAY?

Our little fuzbutts are unique pets with special ferret characteristics you can’t see in any other animal. They are easy to recognize and their owners are full of interesting stories to tell. So, what makes them so damn special? Today I want to share with you some physical and behavioral characteristics of a ferret. We will talk about everything, from their size and weight to dead sleep and hoarding. All that what makes one ferret a true ferret. 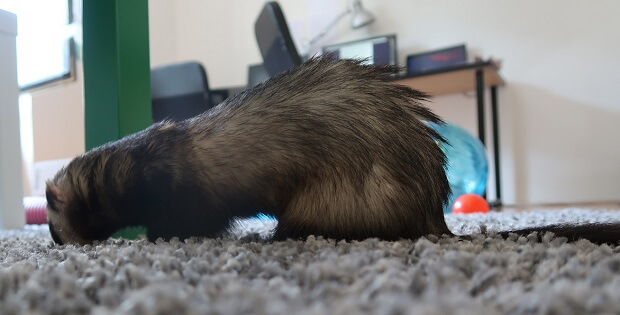 AVERAGE SIZE OF A FERRET

We will start with some basic ferret characteristics, like the size of a ferret. Ferrets are small animals and in most pet shops you will find ferret products under the small animal category. Female ferrets are about 30 to 40 cm (12-16 inches) in length from the tip of the nose to the tip of the tail and weigh about 0.80 to 1.50 kg. Male ferrets are usually bigger than female ferrets. They are about 40 to 60 cm long (12-24 inches) and weigh about 1.50 to 2.50 kg (3 to 5 pounds). Their fur can be in different colors, from white to dark brown, almost black. Also, their fur pattern varies from solid to extremely interesting like blaze or panda. If you are interested in which are the most common types of ferrets you can read my post about types of ferrets.

Another characteristic of a ferret that people take for granted is that ferrets smell bad. Ferrets have a musky odor which is rather unique and most people (when they smell it in person) don’t think it is really something bad. Their natural musky odor can be reduced, not with descending, but with de-sexing because that odor is hormonal. By de-sexing your ferret and cleaning their bedding often, you will reduce their smell.

ANOTHER WORD FOR FERRET – FLEXIBLE


Every ferret should have a long and slim body with short legs. They were used to hunt rabbits down the rabbit holes and their body is perfect for this job. One of the best characteristics of ferrets is their flexibility. Just try to grab your ferret by the stomach and you will feel his body moving out of your grip with no effort. Or, even better proof, just look at their sleeping positions! It is magic! 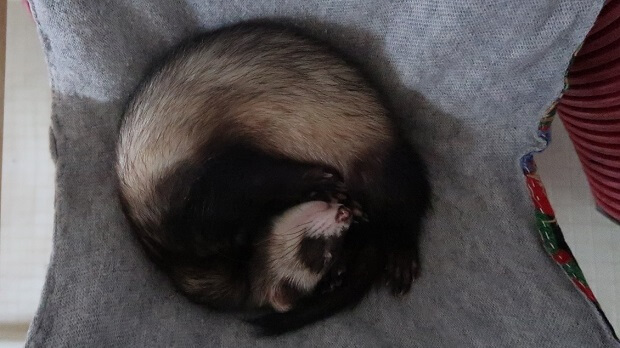 Since I have already mentioned sleep, it is best to go in that direction. I can’t talk about the characteristic of a ferret if I don’t mention ferret dead sleep! Let me start from the beginning. Ferrets love to sleep. They sleep about 18 hours a day and from time to time, they can have a really deep sleep. That sleep is sooo deep, it may appear that it is dead. When ferrets have dead sleep, their body is relaxed 100% and you won’t get any reaction from it, it will look like it is dead. Don’t worry, your ferret isn’t dead, you can see it breathing. You have to look carefully because it breathes really slow in this condition.

Ferret dead sleep will happen randomly, it depends on a ferret. Frida and Yoda both had dead sleep when they were a few months old and only a few times. Ferret dead sleep is one of the best signs that ferrets are domesticated animals, if they do that in the wild they would be some predator’s meal in no time.

Hoarding is one treat of many ferret characteristics which they earned from their ancestors. Almost every ferret does that and it is something you can’t avoid. Their ancestors used to hunt prey and when the prey was too big for one meal, they hid the rest of the prey in some dark and secure place. Today, ferrets stash almost everything, from their favorite toys, your favorite things, meal, keys, tissues, everything they can find. If you can’t find your gloves or socks, look under the couch, in the drawer, or in the cage. Those are the places your ferret will use as storage.

If you feed your ferret with raw meat, be careful because your ferret will hoard that meat, which can spoil. The best solution for a hoarding ferret is to keep it in the cage until the meal is over. That way it can hoard only in the cage and you can easily pick it up.

Now, one completely opposite side of ferrets. One of the most famous ferret characteristics is the ferret war dance. If you are in bad mood, look at your ferret, play with it, and enjoy the view! Ferret war dance is easy to recognize because they look like they had too much coffee. Jumping, running, dooking are the best terms to describe a ferret war dance.  If the energy is through the roof you will lose sight of your ferret because it will run across the room, from one corner to the other. War dance is my favorite ferret behavior.

Don’t get distracted by their crazy war dance, ferrets are very intelligent creatures. Most of the time they get what they want and that is one of the best characteristics of ferrets. They are cute and they know it! You can train your ferret to go to the litterbox, stop biting, or do awesome tricks! All you need is something they want. A yummy ferret treat is a perfect choice. Since ferrets are intelligent pets, they require interaction, and the more you interact with them, the bond between you and your ferrets will grow. You have to show them that you are their family now. Trust me they will love you back!

Ferrets are pretty amazing creatures and they will make your life awesome! If you are looking for a special pet that stands out from the crowd, a ferret might be a good choice for you. Which are your favorite ferret characteristics? The war dance, hoarding, dead sleep, or dooking? Let me know in the comments!

Anja Delic
View More Posts
Anja is a Friendly Ferret owner and a ferret parent who is involved in the ferret world for more than 10 years. She started her Friendly Ferret blog when she got her first ferret Frida 8 years ago. In 2013, Friendly Ferret was recognized as a great source of information and it has become a good ferret brand for education, products, and fun. Since then, Anja was a part in many ferrets shows as a sponsor and as a judge, and she met many great and interesting people who share the same passion as her - ferrets. Anja is always opened for suggestions and advice, so if you have something to ask or say about ferrets, feel free to contact her on Instagram, Facebook Fan Page, Twitter or support@friendlyferret.com

Anja is a Friendly Ferret owner and a ferret parent who is involved in the ferret world for more than 10 years. She writes posts about ferret health, behavior, diet, and every topic you should know when owning a ferret.

Lost Ferret: Guide On How To Find A Missing Ferret

Become a Part of The Friendly Ferret Expert Team

Can We Use Essential Oils Around Ferrets Or Are They Toxic?

Is Catnip Safe For Ferrets? Can I Give My Ferret Catnip?

Aggressive Or Scared Ferrets: How To Handle Them The Right Way

Why Ferrets Steal/Stash Things & What Can You Do About It?

Can We Use Essential Oils Around Ferrets Or Are They Toxic?

Is Catnip Safe For Ferrets? Can I Give My Ferret Catnip?

Health And CareTraining And Play

Aggressive Or Scared Ferrets: How To Handle Them The Right Way

Angora Ferrets: What Do You Need To Know About This Type Of Ferret?

Ferret Polecat Hybrid: Should You Get One For Your Family?